This week our lovely Debb at Inner Sunshine has set a photo prompt to be used with five random words witha maximum word count 500.
http://www.innersunshine.net/2016/10/06/writing-prompt-for-wednesday-stories-101216/ 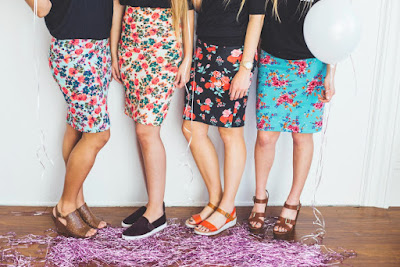 Susan could use the same basic sewing pattern, she mulled it over, yes, with some added oomph and using different colourways would do the trick.  It had taken her a few days to come up with the idea but now she knew where she was going with it
.
The fashion show at the all girls’ school was right up her street.  Trendy young females who would jump at the chance to wear her outfits but she could only choose four girls.  Susan did so hope that they were too young to be allowed to have a tattoo anywhere on their body.  Being rather a posh school it was probably frowned upon along with body piercings in noses and eyebrows and lips.  Susan shuddered at the very thought of it.

Her bookkeeper had agreed that the small amount of finance needed for this enterprise could probably be ‘lost’ in the accounts somewhere along the way so she could look good by donating her skirts to the models afterwards.

The school started sending out the advertising for the event.  It had started a few years ago as a small charity event with the students modelling the latest fashion, all to be auctioned off on the Gala Evening.

The leaflets advertised the event and all the other contributors. To Susan’s eyes one shop stood out from all the rest.  She’d seen the frontage in town and thought it was rather quirky especially with a logo of a picture of a tortoise.  It was something to do with durability of their clothing as the tortoise was so long lived.  Susan sniffed disapprovingly at that idea.  It did seem rather naff to her.

Madeleine, Laura, Emma and Bethany arrived in a flurry of giggles for their fittings, all long legs and ‘like’ and ‘cool’ peppering their language.  Susan felt quite old when she wondered what on earth had happened to the English language.  Nobody seemed to talk in sentences anymore and any kind of sentence construction with usage of the correct verb was out of the question.  Her old teachers would have had a fit hearing that kind of language.

Susan was adjusting Madeleine’s skirt, her mouth full of pins, when her mobile pinged with a message.  Laura looked at her questioningly and after receiving a nod from Susan she picked up the mobile and read the message out loud.

The teasing that ensued made Susan feel young again.  The four girls wanted to know who Jack was.  They came up with all sorts of scenarios, he was her toy boy, he was her lover, he was her gardener, a.k.a Lady Chatterley’s Lover, that last idea had them all in stitches.

Wiping away the laughter tears that were streaming down her face, Susan felt so alive in that moment.  She’d missed being part of a group, albeit with the age difference but that didn’t seem to matter today.  They were all women together.