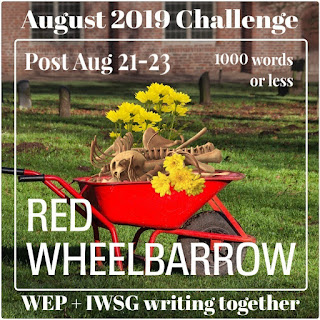 It's time for the WEP+ IWSG bi-monthly writing challenge.
http://writeeditpublishnow.blogspot.com

Laura hadn’t slept a wink last night knowing today they were moving in to their new home.  Kevin snored most of the night, nothing worried him, nothing fazed him, he just ‘went with the flow.’  She couldn’t wait to get out of this flat and into a house with a garden.  A garden no less.  She’d been looking online as to what plants she could grow but frustratingly moving in November was not really conducive to producing many plants.

The promised mown lawn didn’t happen, not unexpected, the bonus was their flat had sold in record time and there was no chain for the new house so the exchange of contracts was plain sailing.
She shut the 6.00 a.m. alarm off and prodded Kevin.  He jumped straight out of bed and started talking nineteen-to-the dozen about the tight schedule they had to keep today.  Laura smiled to herself, she’d arranged it all, marked all the boxes and had a plan for where each item of furniture was to go.  She’d give the removal men copies of that plan and hoped they would keep to it.

Christmas came and went, New Year they toasted each other in front of the brand-new log-burning fire which was their home-warming/Christmas present to each other.  It was so lovely being in this house.  There was such a nice vibe to it.  They planned and plotted and set out their goals for the following year, a major one being to sort out the garden and deal with the shed at the bottom of the garden.  The key to the padlock had been lost many years ago by the previous owner.  Kevin was going to break the lock and ‘find’ the treasures that were held inside the shed.  Laura was certain all he would find would be rotted floor planks, spider’s webs and probably nests of mice.

Laura was weeding the garden during a lovely spring Saturday morning when she heard Kevin shouting for her from the end of the garden.  She made her way through the uneven path (they really must get estimates from a paving company) to see Kevin grinning like a madman.

‘Can’t you see it, Laura love?  This would make a fine feature in our garden.  You could do all sorts of things with it.’

Dubious Laura walked around the galvanised metal container, her finger nails picking at the flaking rust patches.  Her imagination started working.  Rub down the rust, paint it with anti-rust stuff – Google here she came ‘cos she’d need help.  Perhaps she could paint it.  A vibrant red with a profusion of colourful flowers, some trailing over the edges.  There would be odds and end in there every time you looked you saw something different.  A fairy garden.  A dragon haven.  An exotic paradise.  Oh, the sky was the limit.

Kevin received a promotion at work.  He worked long hours travelling away for a couple of days.  Laura didn’t mind so much now her barrow project was nearly finished.  She’d scrubbed, scraped, sanded, smoothed and painted her wheelbarrow.  A new tyre and rubber grip handles had been fixed to it.  She wanted it ready for the August Bank Holiday so she could unveil it at a family get-together she had arranged.  The garden was neat and tidy, the walkway had been paved and they’d even splashed out and had decking built along the back of the house.

Laura and Kevin stood at the doorway welcoming family, drinks were poured, seats taken in the garden, whispering started, what was under that tarpaulin?  Who did they think they were?  Somebody famous who was going to do a great unveiling?

Laura heard some of those remarks, she hid her tears as she put the finishing touches to the food. They made sure everybody had food and waited until the plates were cleared and people’s glasses were refilled.

Kevin stood one side of the cover with Laura on the other side.  Kevin made a little speech.  He said how much he loved their new home; how hard they had worked to make it their own little paradise.  He said how much he loved Laura and how he appreciated all the time and effort she had put in to making their home a loving one.  Now he wanted to show his family and hers what a creative person she was.

Together they lifted the tarpaulin and stood aside waiting for – well they thought maybe they would get a few oohs and aahs or maybe even some applause.  That didn’t happen.  As one their families started to laugh, first trying to smother their giggles behind their hands as they pointed and mocked and started shaking their heads in disbelief.

They always knew this couple were strange but really, a red wheelbarrow with yellow flowers and a full skeleton inside it, they needed to be locked up.  It wasn’t a normal thing to do, no way.  First the cousins looked at their watches, is that the time, we really must be going.  Then the older generation decided they needed to go and get things done and finally everybody left, no goodbyes, no thank you’s, no good wishes, they just left.

Kevin and Laura held each other tightly, murmuring to each other that they weren’t strange.  Not strange, not odd, not mad, not crazy, just artistic, creative, perhaps a little ‘out there.’

The family hadn’t stayed for the best bit. The announcement that Laura had been booked for an exhibition in New York. Her wheelbarrow had won first prize in a gardening competition and would be transported to the USA, included in the competition was a two-week luxury stay in a prime hotel in the centre of the city.

Now the sky really was the limit.  Laura was on her way no matter what her family thought.