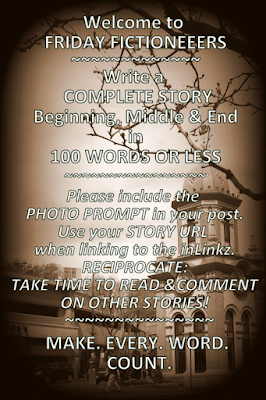 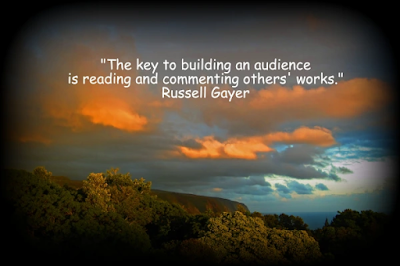 Joining in with Rochelle Wisoff-Fields Friday Fictioneers
The next photo is the PROMPT. Remember, all photos are property of the photographer, donated for use in Friday Fictioneers only. They shouldn’t be used for any other purpose without express permission. It is proper etiquette to give the contributor credit. 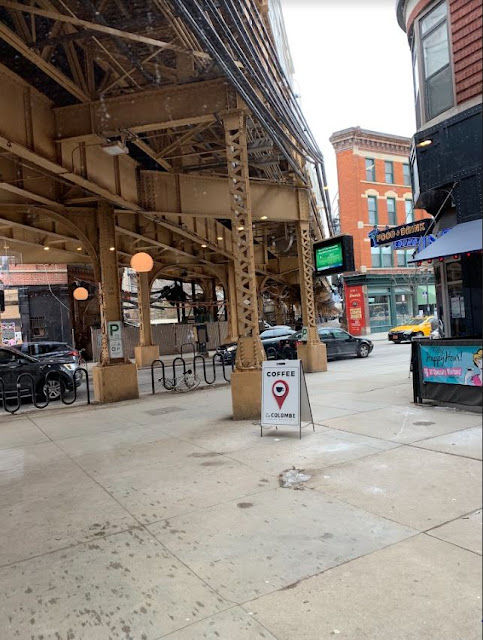 And the smell, just awful

The noise of the machines

Screeching their alarm with steam

Please go back to the genteel art

Of drinking tea that calms my heart

A pot or two a day

Keeps the doctor away

Or so I believe

Coffee addicts queue down the streets

Before they meet and greet

To kick start their day

While on their way

Give your step a spring 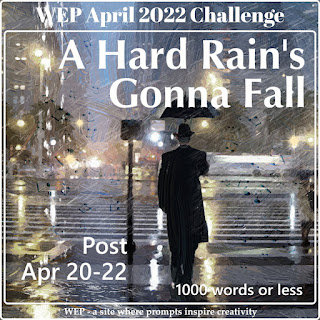 It wasn’t the summer of love per se.  It was summer and I was in love.

A four-day weekend – travel on Friday, return on Monday. Work on Tuesday.

Such a long journey straight across England, it seemed to take all day although the men said it would be four hours, they didn’t count on breaks, traffic jams and kids needing breaks.

I didn’t really follow protests, demonstrations, politics etc but in my limited knowledge CND, Campaign for Nuclear Disarmament, was a pretty frightening aspect of life in the early 1980’s.

We didn’t have much money but with another couple (and their two young kids, one a babe-in-arms) we hired a camper van and drove to Glastonbury in Somerset.  The two men took turns in driving and us girls and the kids were in the back on hard bench seats, no seat belts, thrown from side to side, especially when the friend took over the driving.  I’d never realised before that some people weren’t very good drivers – my chap was an excellent driver but Paul, well that was another story.

As we approached the farm, stopped by police checks, my heart was in my throat as I knew there were illegal substances aboard – not for me – honest, well maybe I would indulge being away from home but I didn’t really like it.  Luckily, I think having the kids with us helped us get through that bit and we followed the directions.

We parked on the slope of a hill.  A good vantage point we thought, we could see the stage with its CND banner and logo over it and congratulated ourselves we had parked in a pretty good spot.

As the campground filled up, colourful tents were pitched, painted vans of all sorts and sizes parked haphazardly in front of us, to the side of us and behind us.  It was just a sea of chaos and cacophony.  Places were marked around your site with flags and banners and anything else you didn’t mind if it was ‘borrowed’ while you were out of the van/tent or just asleep. 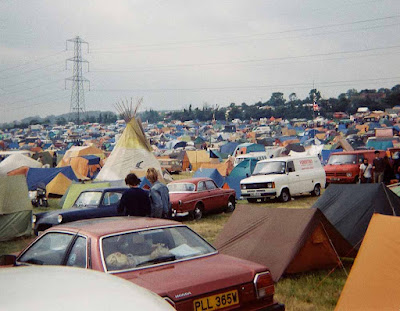 It was certainly an experience and quite eye-opening for an innocent 26-year-old, sheltered girl originally from a small village who moved to a small town.

Facilities were basic (toilets – we won’t go there and I only went when desperate, very desperate).  Water was available from various standpipes; you could buy firewood and make your camp fire.  Luckily the van had cooking facilities but we often found we ate at the vendors selling all sorts of foods.  You could get burgers, hot dogs or more lifestyle foods, vegetarian foods, lentils, vegetable curries etc. - vegans hadn’t quite found the market they have these days.

We were very lucky and the weather was hot in the day, a tad chillier in the evening and night time.

The music was LOUD.

The bands were good and CND were out in full force.

It seemed to me that a lot of people, although probably agreeing with the cause, were mainly there to enjoy the music and to get drunk or stoned and have a thoroughly good time.

The smells were different, ranging from weed, hashish, alcohol and certainly some stuff I wasn’t sure about.  Having a wander around, people were enjoying bongs, hookahs and various other substances.

Wood smoke from people’s fires wreathed through the still air, the stars were out and everybody was calm and mellow.

Wandering down towards the pyramid stage, the musky smell of incense and unwashed bodies, as you tried to shoulder past to get nearer the music, luckily my chap was tall and grabbing my hand powered through until we got prime position – well he did but little ol’ me, a foot shorter, struggled to see.  He offered to put me on his shoulders but I didn’t think that would be very comfortable for either of us.

Returning to the van as the sun began to set, seeing the Tor in the distance, wondering about days of yore, watching my footsteps careful not to tread on prone bodies, flowing skirts or various other items littering the ground, my inaudible sigh of relief as we found our temporary home gave me some comfort.

To be totally honest, I couldn’t wait to be home again and in my own bed!  Such a lack of adventure, a creature who loved her home comforts and although I enjoyed my time away there are certain basic amenities, I found I really didn’t want to do without!

Looking back on those days life was free and easy even though there were protests and demonstrations and people with the courage of their convictions trying to ban attacks.

Now I go to bed at night, sorry for the plight of war-torn people, displaced people, brave people fighting back against an oppressor.

I wonder if my grandsons and granddaughters actually think about it at all.

Several of them of are of an age that - should the worst happen - they would be asked or forced to make sure we keep our freedom by freeing others whose freedom is being taken away.

It is frightening times we live in. 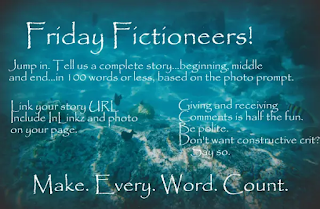 The next photo is the PROMPT. Remember, all photos are property of the photographer, donated for use in Friday Fictioneers only. They shouldn’t be used for any other purpose without express permission. It is proper etiquette to give the contributor credit. 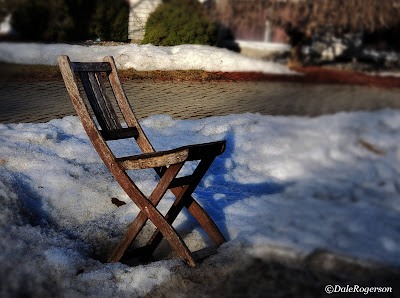 Joining in with Friday Fictioneers - here is my 100 word contribution from the above photo prompt.

Grandad would sit in this old wooden chair come rain or shine, snow or wind, his hands resting on his legs, his pipe in his mouth.

I can’t get rid of his chair.  I look out of my window and still see his essence; I imagine him sitting there. I would bring him a cup of tea, ‘thank you, Duck,’ he would say.

He would come in to the warm kitchen on a winter’s day, blow on his hands and stomp his feet. On a hot day summer’s day, he’d mop his brow and say, ‘it’s grand out there, lass.’