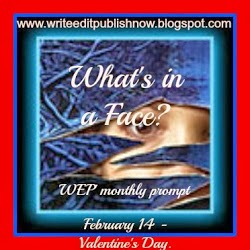 TIME for the February challenge for WEP. The prompt is - What's in a face?

What comes to your mind - a ghost story?  A treatise on the scientific dimensions of the face? a poignant poem? A photo that captures the face? Artwork?  Whatever strikes you as inspiration, go for it!

February 14 is Valentine's Day. You are welcome to incorporate this romantic day, but it is not mandatory! Just remember to keep your flash fiction or non-fiction to approx. 1,000 words.

Here is my flash fiction:

George looked across the street at the steamy windows of the small café opposite.  He checked his watch, a few more minutes he thought before he would stroll over there.

The bell chimed as he opened the door of the bijoux bistro, the smell of freshly ground coffee assailed his senses.  Lucy, the waitress, smiled at him.
‘Your usual, George?’ Lucy was already reaching for a cup.

‘Please.  I’ll take the window seat over there,’ he pointed towards the end of the café.  Lucy nodded her approval.  ‘I’ll bring it over to you.  Do you want a pastry?  Freshly baked half an hour ago by Mary’s fair hand, go on, spoil yourself, George.’  Lucy tried to persuade him to eat something, George was far too thin and it wouldn't hurt him to have a bit more meat on his bones.

George smiled his thanks as he shook his head declining the lovely treat.   He settled at the table gazing out of the window at the place where he had been standing just a few minutes ago.

The tall office building with its glazed windows stared blankly out at the world.  He wondered what secrets lived behind those panes of glass, what went on as people arrived at work regular as clockwork to join the rat race.  It was something he was very familiar with.

He glanced at the large clock on the wall, 6.20 p.m.  Only a few more minutes he promised himself. 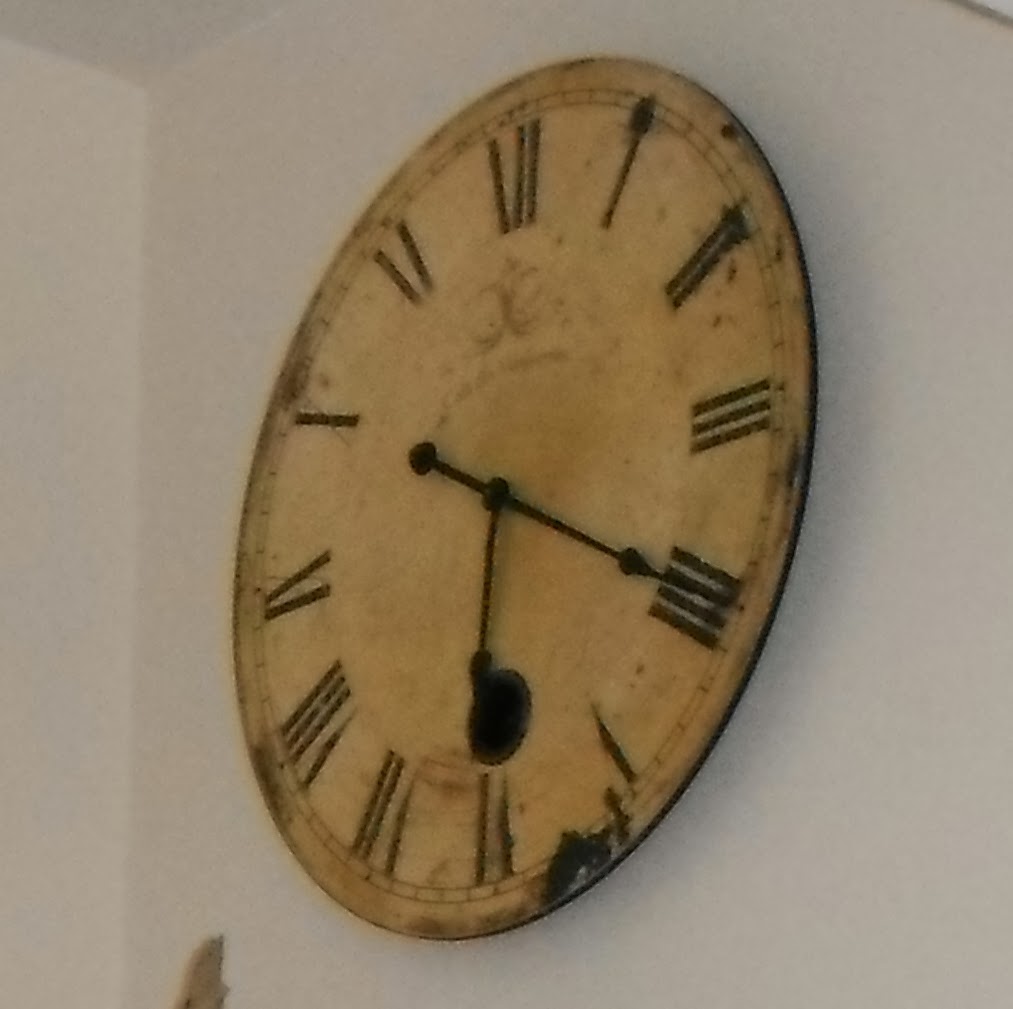 He sipped the coffee Lucy had placed by his side; he scalded his tongue, as he
always did.  He removed the sachets of sugar from the saucer and smiled as he unwrapped the biscuits Lucy had placed there.  He glanced over at her, she was serving behind the counter but felt his gaze, he smiled his thanks to Lucy who acknowledged him with a subtle wink.

George’s attention was taken up by the exodus of the office workers from the large building opposite.  Men and women in business suits rushing every which way to catch their trains and buses, some lingered for a few minutes saying their farewells.  A group of young ladies bustled across the road and entered the café, laughing and jostling each other gently as they settled at a larger table.

From George’s vantage point he could see a young lady, brunette, in her mid 20’s with a lovely smile and a vivacious way about her.  He pulled out some papers from inside his jacket pocket and glanced at the photograph therein.   It was an image of a young woman of a similar age to the girl opposite him enjoying a conversation with her friends.

Their refreshments came, delivered by Lucy with a cheery smile.  The girls had drinks and some of those delicious pastries that had been offered to him.  George wondered whether he should order one now so that he could stay longer and enjoy his position of eavesdropping.

Lucy caught his eye, raised an eyebrow quizzically and he nodded his order.  She was such a dear.  He knew she worked hard as a single mum bringing up her two teenage sons; sometimes they came in at the end of school to wait to walk home with her.  They were turning in to thoughtful young gentlemen.

He bit into the delicious pastry, brushing the golden flakes from his jumper and patting his mouth with the paper serviette supplied on the plate.  He glanced over again to the table containing the young office workers.  They had been joined now by a couple of male colleagues.

A booming voice cackled out laughter, rather falsely in George’s opinion.  He was obviously one of those Hooray-Henry's you found at boarding school, had probably got his position because his father knew somebody at the company across the road.

Lucy appeared at his table to clear the plates and noticed the photograph.  She looked at the photograph then at George and then across the room focusing on one of the young women seated there.  George placed his hand gently on Lucy’s arm; she immediately sat down beside him as she noticed his eyes were rather red and watery.

Her nearness and quiet comforted him until he felt ready to speak.   He cleared his throat, turned his head to look at Lucy and said softly, ‘I think she may be my granddaughter.  I was sent this photograph by a ‘well wisher’ last year with the address of your café.  That is why I come here once a week and over the last few months I’ve noticed this young lady and felt a connection.  Tell me I’m being a silly old man.’  George’s eyes pleaded with Lucy to deny this.

Lucy looked at the photograph.  She shook her head.  ‘It’s so difficult when you can’t see all of her face,’ she said puzzled.  ‘There does seem to be something familiar about her though, I must agree.’

George nodded and swallowed hard.  ‘I don't know what to do.  I don't want to upset her life but if she is my granddaughter then ......’ his voice tapered off.
Lucy said, ‘shall I try and find out for you?’

‘Oh no, my dear, that’s too much trouble for you,’ replied George.

The following week George was there again waiting in his seat for the young office women to come in to the café.   He noticed Lucy’s boys were already seated at a table, using the Wi-Fi connection for their homework.

Tom, Lucy’s eldest boy, dashed to open the door of the café to allow the girls to enter.  A bit of banter ensued and the boys were invited to join the girls for a coffee.

So that was Lucy’s idea, to get her boys to find out more for him.  He was lucky to have such a wonderful friend as Lucy.

He was sure she was his granddaughter.  He would swear those eyes they were the same as her mother’s. 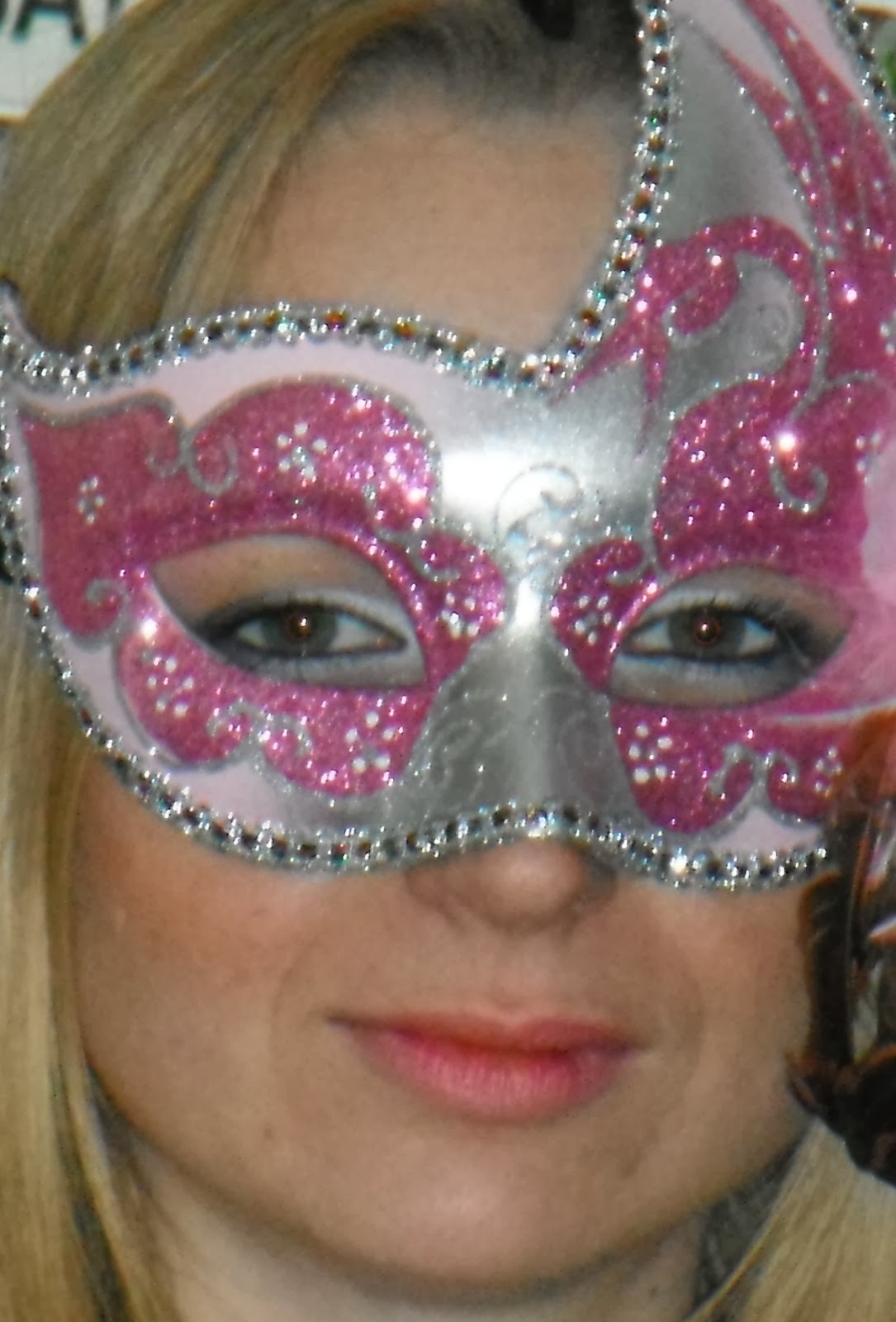