Here is how the blog hop works–everyone is invited to participate, so be sure to jump in anytime and invite a friend!

1) Write a story using both photos.

3) Submit your completed story to your blog hostess (Nicole, Carrie, Tena orLeanne)  (If you need a bit of help with this step, just leave a comment and we’ll get you linked up!) 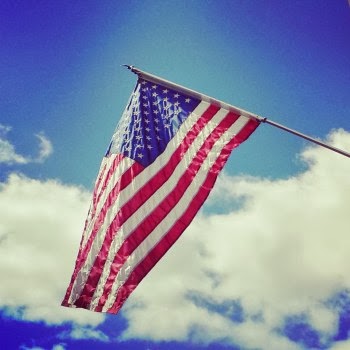 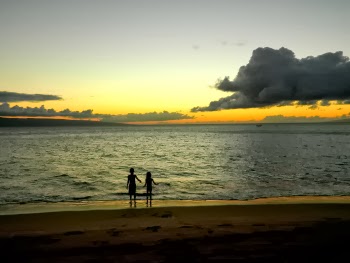 Here is my flash fiction from the photographs:

Natasha nestled herself into the wooden trestle chair, cushions supporting her back. The veranda of the beach home they had rented for a weekend break was sheltered from the breeze.  She heard her husband, Mark, speaking softly on his mobile phone.  She stamped down the swell of indignation she felt as he answered the call from his office.    They were on holiday, for goodness’ sakes.

She shaded her eyes and watched their two little scamps at the water’s edge as the sun glowed orange through the clouds, framing this moment in her memory and her heart forever more.  She smiled to herself as she realised that Melissa had moved her hand out of her big brother Danny’s protective clasp.  She was such an independent little madam, who thought she could do anything she wanted.

So much had happened over the last ten years and if she had been told a decade ago that she’d be sitting underneath an American flag wafting in the gentle wind, the halyard rhythmically clanging against the pole watching her two children she would have laughed her face off.

Meeting Mark and falling in love with a quietly spoken American man was not in her life plan.  That board meeting she had attended in as a last minute replacement for a colleague who was off sick was obviously pre-ordained by someone or something, fate or destiny or kismet or somebody’s plan in the grand scheme of things.

Natasha wasn't looking for romance or an affair or anything that meant commitment.  After her last disastrous brush with ‘love’ she’d decided to dedicate the next few years, at least five, to her career and go for it.  Then along came Mark with that sexy accent, those deep brown eyes, the quizzical eyebrows, a mind that raced ahead nineteen-to-the-dozen that many people found it difficult to keep up with him which sent him into deep frustration.

She wasn't interested when he asked her to recommend somewhere to eat in the evening.  She’d suggested a lovely little Italian restaurant not far from his hotel.  She wasn’t interested when he suggested she could join him, she had to eat didn't she?  Now Natasha’s boss thought it would be good for someone to get to know Mark better and to gain an insight into what he wanted in his business.

The dinner went well, conversation flowed, the food was good and then Mark left for the States the following day.  He texted her, he sent her flowers; he came back the following week on holiday and persuaded her to take some leave.

She kept up with his thoughts and the rest, as they say, is history.  She moved across the vast ocean and settled into life as his wife, then the two children came along and she was so happy.

Now the special moments like these, under a foreign sky, the loneliness and homesickness hit her heart hard especially when she couldn’t share these moments with her own family, living far away.