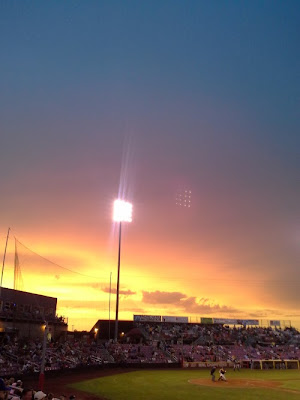 THE SURPRISE
Thank goodness that sales meeting was over.  Why the Area Sales Manager thought they didn’t know how to attain the monthly goal he’d set for the team was beyond Dean’s comprehension.   He always hit his targets and he never went over his budget, in fact for the last three months his area had been in profit.   Dean was never thanked for all his hard work which rankled him on occasion.
He returned to his office and glanced over to his printer.  Sitting in the print-out tray were two tickets for the evening game next month.  His colleagues must be playing a prank on him.  He knew how difficult those tickets were to get. He pulled the paper out and examined them closely.  They did look bona-fide.
He woke his computer up and scanned the emails.  He’d been gone just the hour and there were hundreds of emails in his inbox.   He smiled to himself as he remembered what his mother always used to say to him when he was enthusiastic about something.
‘Dean, I’ve told you a thousand times not to exaggerate.’
His dear mum, he could picture her now in her kitchen cooking up a storm.  One of her favourite meals when they were kids in the summer was to char grill capsicum so that the yellow, green and red skins of the peppers would burst and they would burn their fingers trying to peel the skin off before they had cooled down sufficiently.
He would Skype his mum tonight when he got home and touch base with her and his step-dad.  He would take some time now to work out how he was going to tell her his news without sounding trite and clichéd.  He knew she hated the way he used the buzz words from the office but that was the environment he lived in these days.
Eleanor was waiting for him when he got home that evening; she greeted him with a smile.  He flourished his game tickets at her and caught her expression just before she turned away to pour the coffee out.
‘Hey, you know something about this, don't you?’
Eleanor came over to Dean, placed her hands either side of his face, stroking his cheeks.  ‘Oh darling, when is your birthday?’
‘Next month – oh,’ Dean was flabbergasted.  ‘Did you arrange these?’
Eleanor nodded, smirking gently.
Dean picked her up and whirled her around the floor.
Laughing Eleanor protested half-heartedly to be put down gently.  ‘Although there is one snag,’ she whispered.
Dean looked at her quizzically, the wine bottle he was about to open in celebration paused midway up his chest.
‘Your boss has insisted on coming as well.’
‘OK.’
‘With his wife and their teenage children.’
Dean sat down at the kitchen table, plonking the wine bottle down firmly.  Eleanor looked at him and waited for him to speak.   She knew how hard this would be for them both meeting his ex wife again after all these years.
Word Count: 498
Posted by Sally at 08:04