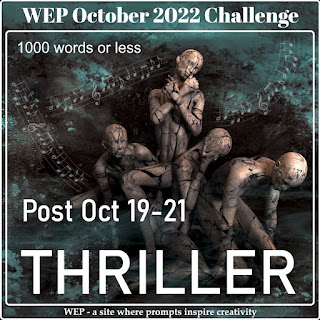 Here is my entry for the WEP October 2022 challenge.

She waits wistfully at the window

Wondering if he will be a no-show

Ready and willing for his caress

In her lacy, gossamer thin dress

A draught plucks at her alluring beauty

As she waits to see the glare of headlights

She waits with bated breath, her pulses throbbing

Every fibre of her being aching

His key turned in the door

He would satisfy her amour

Tonight, they would conceive an heir.

Lucinda waited one month, then two months until she was sure, the conception was true.  It was so hard being the hidden mistress but she knew his wife was barren.  The spell she had placed upon his bride at their wedding feast had worked!  Her training held true, through the maternal line , secret all these years until the daughter reached adolescent and proved herself to be fertile.  These days of planning ahead and taking all sorts of precautions made life much easier in choosing their intended sire.

Lucinda sent a coded text message, ‘your goods are ready to pick up.’  Ha! If his wife saw that he could spin a yarn and she would believe him, the gullible hussy that she was.

The crystal ball that Lucinda scried in to when the moon was full had shown her that the ‘belle of the ball,’ the most ‘beautiful bride in the kingdom,’ was not as innocent as her looks would make people believe.  Hidden beneath the exterior skin was a heart made of stone.  One that wanted to be the wealthiest woman in the realm.  Oh, she really must get back to the real world and get some sense of normality back in her life.

Lucinda was sure, absolutely sure, that the foetus she carried was female.  She could feel her strength seeping through her womb.  She sang songs to her; she murmured incantations from long ago but then –

As the weeks progressed the stronger the feeling became of something trying to stop her, trying to vie for her attention.

At first, she thought her spell was weakening and her lover’s wife was beginning to believe in her own powers too much.  Humbug! She didn’t have any powers.  She just pretended to get her own way, not just satisfied with her own paramours she attempted to keep her legal spouse under her thumb with her seductive powers.

Through the ‘power’ of social media Lucinda learnt that Phoebe had secret assignations, more than one, in the vain hope she would be carrying a child and therefore could tether Aaron to her forever.

Lucinda sighed as she checked her reflection in the mirror.  The beauty she beheld came from within as well as her outside demeanour.

She arrived at the hospital ready for the scan, smiling benignly at the other mothers-to-be.  The technician began the ritual of passing the wand over her stomach which showed the first swellings of new life – her daughter – Lucinda was sure the female line was strong enough to continue the special lineage of her maternal line.

Lucinda glanced at the monitor.  No, no, no.  That wasn’t right.  It couldn’t be right.  There was no way.

The sonographer smiled, you have twins, my dear.

Lucinda managed a forced smile, thanked her politely as she left the table, seething inside.  This was not supposed to happen. Not to her.  There should only be one.

Her mind raced with thoughts, discarding one plan after another.  She drove home on automatic pilot.  Took her tea to her room, sat in the nook of the window and gazed out at the courtyard.  Absent-minded she dunked her digestive biscuit in to the hot beverage, her mind racing until the biscuit crumbled in to the base of the teacup.

Just as she was about to swipe the offending cup onto the floor in her rage she glimpsed Aaron’s sports car pulling up to the door. She rushed to greet him, putting on a cheerful face, pretending all was well.

He was happy, so happy with her.  She couldn’t let him down.  The words would not come out of her mouth.  She would pretend and then, well she would read and read and find a solution in the books of old, the books her mother, grandmother and those before them swore by that could cure all manner of things.

The time came.  Lucinda howled, screamed, pushed hard and was rewarded with the lusty cries of her first-born son.  She pushed him off the bed and concentrated on her daughter, so much easier this time.  The bright blue eyes, knowing, wise and so clear looked adoringly at her mother.

Lucinda chanted the spell, the incantation falling from her lips while the full moon rose and shared its silver light in her bed chamber.

She swaddled the male dead form, grabbed the ready-made box and called her loyal servant.  She watched him trudged up the mountain side and return empty handed.  She heard the wolves baying, the silence as they gorged themselves on the unexpected feast.  The leader of the pack stood on the peak howling at the moon and she swore he could see in to her soul even from that distance.

As Lucinda aged, her attraction waned, Aaron stayed loyal to Phoebe and surprisingly they also had a son and a daughter.  Only time would tell who would win this battle of inheritance, Aaron would acknowledge her daughter.  If Lucinda had anything to do with it.