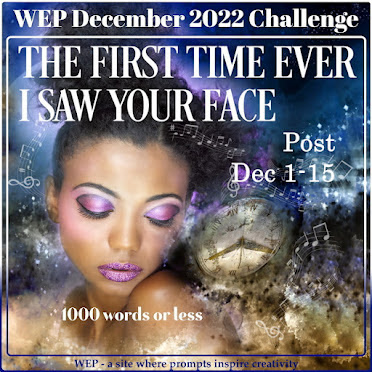 THE FIRST TIME EVER I SAW YOUR FACE

I didn’t want to get in to trouble, never had and hopefully never would but somehow, I was pulled to the fence separating my girls’ only school with the boys’ only school whose grounds were far down the edge of the school perimeter kept apart by the chain link fence.

I tagged along with the other three girls, Mary, Susan and Beth as we quickened our steps, trying to act ‘cool’ at 15 years old and not look too eager to chat to some boys.  A gaggle of spotty, long-haired boys, acne appearing on some, whiskers sprouting on others, the beginning of a moustache on others were already hanging around in the dip of the slight hill.

We were hidden from view of the school, we hoped, the teachers rest room was on the other side of the building so we felt relatively safe from their prying eyes.

There he was.  My stomach flipped, my throat was dry and I wished I had slicked a smear of Vaseline over my lips – it was supposed to look sexy according to Mary.  Mary who came to school with subtle eyeshadow, darkened eye lids, flawless skin, no breakout of spots for her at certain times of the month.  She also wore dangling earrings, not the standard, allowable, gold studs that all the other girls wore, a bit of a rebel was our Mary.

Blonde curls, green eyes, not very tall perhaps but it was difficult to tell with us standing in a dip and the boys posing on the other side on slightly higher ground.

Then he spoke.  All these years later I can’t remember what words were spoken but his image burned in to my brain from behind my retinas.  Oh, my! A deep voice, a sexy voice, a noticeable Adam’s Apple, not prominent but manly.

My mind said, stop fidgeting, stand still, uncross your arms from your breasts, take a deep breath and stick them out a bit more whilst holding in a non-existent tummy.  My skirt was already turned up at the waist band, only once but it was enough to bring the hem up and over my knees by a good inch or so.

Then we heard the pips go summoning us back to class.  We dashed by to our respective rooms, tummies rumbling as we hadn’t had chance to eat our lunches.  How on earth was I supposed to concentrate on maths (not my best subject anyway) when all I could think about was his face.

I dreamt of him that night.  Friday night, Saturday night, Sunday night without seeing him.  Monday came as I waited for lunch break, thoughts of our clandestine meetings were interrupting my concentration on French grammar, us girls and those boys.  I was only interested in the one boy.  The other faces paled in to insignificance.

The week flew by, I lost more weight by using up lunch time space to visit.  Gradually over the weeks my friends lost interest in the boys and played netball in the lunch time.  Not me.  I had to keep seeing his face.

Six weeks of summer holidays, home with my mother and brother, Dad was away on board ship for 18 months, some already passed, letters received once a month from this strange man on flimsy airmail letter papers.  I got a job working as a Saturday girl in the local village shop, that filled in a good 12 hours once a week.

Somehow the weeks and days flew by, then I was back travelling to school every day.  I sat on the coach trying to calm myself.  Would he be there at lunch time?  Would he remember me? Would he look the same?  My hair was freshly washed, I pinched some of mum’s perfume and had dabbed a small amount at the base of my neck and on both wrists.  Every now and then I would take a surreptitious sniff, feeling slightly guilty that I’d stolen from my mother but hopefully it would be worth it.

Lunch time came.  I asked my friends if they were going to wander down to the edge of the field at lunchtime.  They laughed at me.  What on earth for, was the surprised response.  It seems they’d all forgotten our trysts with the boys but then one of them said, they built a brick wall down there, you won’t be able to see anything or anybody.

Disappointment coursed through my body.  It was all I could do to smile and say, never mind, shall we play netball instead.  I jumped around half-heartedly and still managed to defend my position and stop several attempted scores from the opposing team.

I arrived home in the evening, ate my meal and disappeared in to the dining room to start my homework.  I found it very hard to concentrate and to keep up a pretence that everything was OK although, in my family it seemed as though nobody took any notice of me anyway.

All these years later I still remember the feeling, the image of a face, not the details apart from the hair and the eyes – I’ve always had a thing for eyes, the gateway to the soul or the locked door hiding a myriad of secrets.

That feeling, that first crush, innocent as it was then, has stayed with me on and off throughout my life, sometimes I wonder what happened to that young man.  Did he make something of himself?  Did he find true love with somebody?  Was he a good father?  Maybe he went against the law and ended up in prison – that wouldn’t have surprised me either.

I will never know but to this day the first time I saw his face will remain with me, imprinted in my brain, subject to an abstract scrapbook of nostalgic images, filed away as a private memory, never to be sullied or dirtied in any way as I don’t know anything about him.  I can’t even remember his name!