Here is our writing prompt from Debb the Minimalist Wednesday Writing
If you want to join in please go to her blog:
http://debbietheminimalist.com/2017/06/15/writing-prompt-61517/

June 15, 2017
Writing Prompt 6/15/17
Hello!  Ready for a picnic — or an outside snack – now that summer is almost here?
This prompt will be a bit unusual, but I know you can handle it!
See the photos below.   I would like us to write a story of any length – long or short! and tell which was the favorite picnic according to a person that was present at both picnics.  Why did they like that picnic the most?  What were the negative things he or she remembers about the best picnic?  (IF you want to take it a step further — what were the positive things about the picnic not chosen to be the best?)
Craft your adjectives to bring us directly into the scene by the strength and beauty of your words.  Help us to “use” all our senses when we read your story.
I wish we could all go on a picnic together!  Wouldn’t THAT be fun?  Well, the best we can do in that regard is to really have fun writing about the picnics… 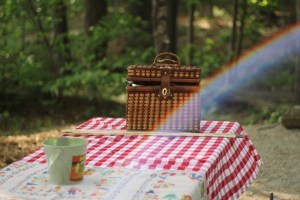 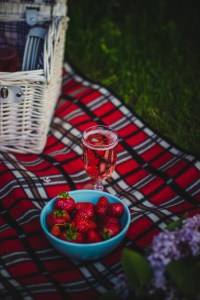 Sunday afternoon the rain was lashing the window panes, the wind howling outside, eerie sounds moaned through the cracks in the wall.   Jim bent and lit the fire, Geraldine had laid it ready this morning before she put the Sunday roast in the oven.  Now they’d eaten the wonderful meal she’d prepared, he’d finished the dishes and she was making a cuppa while he tended to the fire in the lounge.  Really he should have done it sooner before they settled in for the afternoon but it wouldn't take long for the heat of the heat of the fire to penetrate the room.

Half an hour later, tea consumed husband and wife sat back and relaxed.  Geraldine had removed several photo albums out of the bookcase and together they opened the pages reminiscing about the photos and the people, friends and loved ones that were memorialised amongst those pages.

The album with a summery cover was the next one to peruse.  Jim opened it and the first photo brought back many memories of several years ago.  Geraldine started to relate her thoughts about that time they all went on a picnic.

The red gingham tablecloth covered one of the put-up tables, a patterned cloth covered the other one.  Now were they just setting up or packing up, neither of them could actually remember.  What they did remember wasn't necessarily the food but the company they were with.

Jim remembered the smells of the grass, the aroma of the green leaves on the sapling trees in the background and the sunlight filtering through the branches.

Geraldine remembered their friends laughing, chatting and joking together.  That time was perfect.  It was an ideal setting, the weather was perfect (unlike today).  It was probably one the best days out they had had out for a long time.

Gazing in to the fire, watching the flames, Geraldine and Jim thought back to that particular summer’s afternoon.   They did remember the food was good, nothing special, a few sandwiches, a pork pie, a salad, some fruit for dessert and a few Thermos flasks, one with tea and one with lemonade to keep cool.

‘Ah yes, those were the days,’ said Jim, ‘but what about the bees and wasps?’

Geraldine laughed, ‘yes, and the ants.  Oh my goodness, those pesky ants.’

They both laughed as they remembered the good and the bad.  Eating outside wasn't always idyllic.
They turned several pages in the photo album, remembering events and people and places.  The last page contained another photograph of a picnic.

An open-air concert held at Leeds Castle in Kent with the Philharmonic Orchestra playing live, with the 1812 overture as a finale and real cannon fire.

‘Well that cannon fire went right through me.  I thought my chest was going to explode when that went off.’  Geraldine laughed, Jim patted her hand, ‘you always were such a wimp, my dear.’  He winked at his lovely wife.

‘It was a lovely summer’s evening, packed with people but that didn’t spoil our enjoyment of the music.’

‘No, nor the glasses of Rosé wine, chased down with a few fresh strawberries.’

‘I wish we were young enough to do that sort of thing again,’ sighed Geraldine.

Jim laughed, ‘yes, but if we got down on the rug we’d never get up again.’

Geraldine continued, ‘then we trekked back to the car park, luckily the bags were much lighter.  The queues to get out of the car park were horrendous.’

‘We decided to stay and wait until it had died down.  We ate the last of the sandwiches and had a swig of cold tea to wash it down.’

‘Oh, the smell of the petrol fumes as the cars idled in front of us waiting to get out of the car park. That wasn't very nice.  How long did we wait?’  Geraldine couldn't remember.

Jim thought they’d sat there for a good hour or more before he even attempted to switch on their engine.  They listened to late night radio under a starlit sky and eventually made it home in the early hours of the morning.