WEDNESDAY WRITERS - THE CAT AND THE BIRD

This week we were given two photos as the prompt for Wednesday Writers. 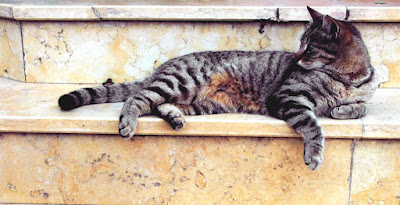 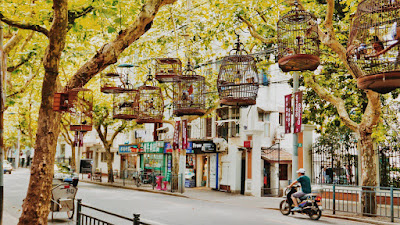 THE CAT AND THE BIRD

It was so tempting, Jerry kept watch from his vantage point.  It was cool on these marble steps, he was ready for anything, poised and alert, ready for action.  The noise of a pop-pop scooter had alerted him, the smell of the 2-stroke, the fumes from the noisy machine got right up his nose.  Why humans had to use those contraptions to travel he really didn’t know.

It was worse when the people who gave him food and shelter decided to lock him up in a travelling cage and take him to an antiseptic smelling building where a rather obnoxious male stuck a needle in him and poked something up by his tail, talk about undignified.

Didn’t they know that cats once ruled the world and were revered as gods, as they should be, by golly gosh!  Then he was subjected to that awful travelling cage again but thankfully the journey was taken in a more comfortable, roomier machine than that two-wheeled thing speeding down the street.

The cages hanging from the tree branches swayed gently in the breeze, the birds enclosed in them tweeted and chirped, sometimes in alarm and sometimes they just couldn’t help themselves as they sang out in wondrous joy.  What they had to be happy about, for the life of him, Jerry couldn’t work out.

If they weren’t so high up they would be fair game and he could have a bit of sport stalking them but hey-ho that was his life, so he settled back, stretching along the cool marble.  He’d have a cat nap until it was time to wander indoors for a snack.

Feathers ruffled by the breeze
Billy sang out with ease
His wing tips were clipped
Left foot ringed and chipped
His last day of freedom
Taking the nectar from the blossom
The delicious sweet amber liquid
His attention was clouded
As he concentrated on feeding
Sated he flew in to the netting
Hanging from a tree
Limited to what he could see
Now he sang
All day long
From sunrise to sunset
He would never forget
Those days of liberty
His days were dreary
His wings weary
With useless flapping
All he could do was sing
His heart out all day through
High up with a clear view
Of dangers down below
He spotted an age-old foe
The cat was aware
Gave him ‘the stare’
Billy relaxed as the feline
Stretched his spine
Along the length cold stone
Marbled step he used as a throne.
Word count: 416