HERE ARE THE RULES:

Here is how the Blog Hop works so it’s fair for everyone:
If it is a two-photo prompt, the two photos must be visible in your story.  If it’s the 1 photo/5 words prompt, the photo and 5 words MUST be clearly referenced in your story. Variations on a word are allowed within reason (for example: adding s, ed, ing to the word to be grammatically correct); but creating a new, unrelated, word is not. (To see an example of a “1 photo/5 word” story see Faith, Hope, Love, and Pink by one of our hostesses, Debb Stanton.)

Photos are the property of the hostess for the week, unless otherwise mentioned.

Please Do Not share photos and/or prompt words as your own.

In order to honor the community-purpose of the blog hop, we ask that you please reference the blog hop (not one of the hostesses) in your post so your blog audience and the blog hop community may all be connected.Link your story through the blue froggy on the hostesses' sites Debb, Heather, or Tena at the bottom by the following Tuesday (direct link to story, not your whole blog, please).

This week's challenge is a photo and five mandatory words to be used. 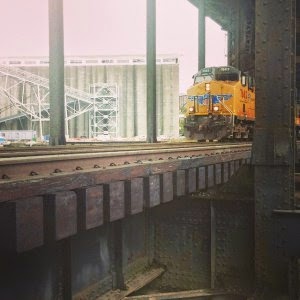 Louise sat at her desk, the computer icon blinking restlessly at her fingertips.  She moved the mouse; the cursor hovered over the titles showing variations on the theme she needed to explore.  She needed to get this report finished before noon today or she would be in terrible trouble with her boss who was rather a bully, maybe it was because she’d only been in this job for six months but either way he was quite a grouch sometimes.

She jumped, startled by the whistle of the big train.  She should be used to it by now as it was a frequent occurrence that she could see and hear from her office window.  It always thrilled her when she heard the thunder of train wheels click-clacking rhythmically along the railway.  It would never become common place to her, this love of trains she had that she kept to herself.

Louise became mesmerised by the yellow train engine as it slowly traversed the track, high up through the industrial section and then out to the countryside, it would pick up speed as it accelerated through the suburbs, past the Holiday Inn, past residential houses that became more and more spaced out as it gathered momentum and then reached its optimum velocity according to the legal limit of railway law.

Reluctantly Louise tore her gaze away and back to her computer screen admonishing herself to concentrate on the task in hand.  She clicked a new document open and sat staring a blank screen, a blank space mocking her as she searched her mind to type the title page.

What she needed was a headline, something that would immediately make a statement.  She needed to make her boss, ‘Mr. Grumpy-Pants’ as she called him in her mind, sit up and notice her good work, not returning the document back with red track changes and highlighted sentences all over it.

The clock on the office wall marched on inexorably towards the midday deadline as Louise became lost in her typing.  The world continued turning, the minutes ticked by, the keystrokes pitter-pattered over the other hard workers in the outer offices, eventually Louise looked up, took a deep breath, glanced out of the poky window and there was another yellow train making its way towards her.

Wishing she was on board, travelling to regions unknown, ready for an adventure, she forced her eyes back to her document.

I will not tolerate your manipulative ways.

I will not be cowed nor subdued by you.

I will not bow down to your will.

Gasping in shock and horror, Louise searched for the delete button.   She felt his breath on her neck as she clicked the icon.  She turned in her chair, held his gaze without wavering, while her heart thumped hard in her chest.

He pointedly glanced at the office clock, the hands set straight up at 12 o’clock, gave her a withering look as she retrieved the proper document onto her screen.