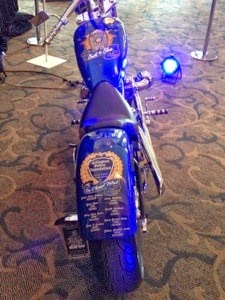 George’s body was stock still, as he gazed in awe at the machine in front of him.  He grinned, suffused with pleasure as he remembered days and times long ago now when he was a different person.   A young man, eager to do a day’s work, to go that extra mile and his superiors had noticed.  It wasn't long before he was promoted and he moved up the ranks.

He ran his hand over the motorbike, feeling the contours, the coldness of the metal touching his finger tips, the arthritis in his knuckles looking ugly as they skimmed over and lightly touched the leather seat, silky, no that wasn’t the word he wanted, soft maybe, no that wasn't right either, damn this age thing in his brain.  It was almost as if his thoughts came and went and leaving a big crack crazing through his mind.

He looked around; the coast was clear, he would just hoist his leg over and sit, one more time, on this machine.  What harm could he do?  The saddle was low slung; he should be able to manage it.

George placed his left hand on the grip of the handlebar, leaned over to his left, he could almost feel the power coursing through his body, he lifted his left leg in the air,  grazed the top of the saddle as he felt for the ground underneath his foot.  Steadying himself with both hands on the handlebars he lowered his posterior on to the seat.

Another place, another time, a younger time when his knees weren't arthritic, his heart was sound and healthy, no popping tablets everyday to lower his cholesterol and control his blood pressure.

He closed his eyes, felt the wind rushing past him, brushing his shoulder length hair, the sting of the air as it brushed his cheeks, he gripped harder, then lessened his hold on the throttle as he tightened his grip on the brake lever.

‘Dad! Dad, what on earth are you doing?’  Jemma’s voice came to him from far away.  ‘Get off there now!  Honestly, taking you anywhere is worse than taking my kids out for the day.’

George opened his eyes, took a sneaky peek at his daughter standing there with her arms folded across her chest.  She was no fun some days.

Jemma shook her head slowly as she helped her dad dismount from the motorbike.

‘I remember those days, Jemma.  They were such fun.  I used to take your mum on the back sometimes just round the block.  She would hang on for grim life.’  George smiled at the memory.

Jemma pulled him away, quickly ushering him towards another exhibit as the security guard began to approach them.