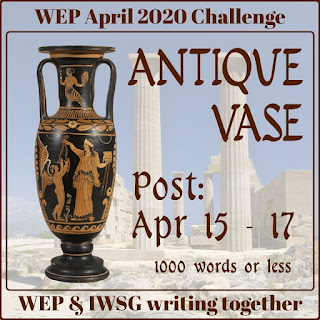 It's time for our bi-monthly challenge.  Here are the short guidelines for anybody who wants to join in or read talented writers' entries.


1. SUBMIT your name to the list below on the publication of your entry. Add DL after your name. (DirectLink) We will no longer add your Direct Link.2. POST your edited entry, making sure 'WEP' is in the TITLE along with the Antique Vase badge within your entry.3. STATE feedback preferences and word count at the end of your entry.4. READ other entries, giving feedback if requested.5. SHARE THE CHALLENGE on social media. Tweets are ready on the WEP blog.PLEASE NOTE: ENTRIES CLOSE April 18 (NY Time - check WEP blog clock)ALL GENRES WELCOME except erotica - 1,000 words maximum FURTHER ENQUIRIES: writeeditpublishnow.blogspot.com and leave a comment or email: den.covey@gmail.com or contact Renee at yolandarenee@hotmail.com

Hetty sighed inwardly and turned back to her garden in the hope her nosy neighbour would take the hint and return to her own house.  No such luck.

‘Your blue vase isn’t in the window anymore.  I could have sworn I saw it in the shop window for 2/6d when I was in town the other day.’

Was that a slight sneer she heard in Mrs. Powell’s voice?  Straightening up, Hetty looked her neighbour in the eye.

Mrs. Powell sniffed and shuffled away towards her own front door.

Hetty fumed over the exchange for the rest of the morning.  What business was it of that old biddy’s where her blue vase was?  She swiped away a lone tear.  It had been a tough decision to sell it to Falstaff Antiques in the nearby town but she’d needed the money to pay the coal man and the rent was due at the end of the week. Then she thought about the price old man Falstaff had paid her and what it was in the window for.  Fred wouldn’t notice it had gone.  It wasn't his fault that his work had dried up.  He was walking in to town to see a man about a job today.  Hetty only hoped he returned with good news.  Back indoors she took the bread dough, which had risen nicely, and started to knead it with a vengeance.  A nice crusty loaf with a smattering of home-made gooseberry jam would go down a treat.

Every so often Hetty thought about her beautiful blue vase.  Every time she went in to town she looked in the antique shop, she browsed the shelves, brushing off the owner’s attempts to sell her some tatty old thing.  She never found her vase.  As the years passed there were more things she had to think about, grandchildren came along, Fred passed away and she had to build her life again.  The vase was never very far from her mind, especially at night when it appeared in her dreams.  Being a very stalwart and practical lady, she didn’t believe she actually heard the words in her dreams.

Find me
Save me
Bring me home

In the cold light of morning as she raked the ashes out from the grate and re-laid the fire ready to light in the evening, she dismissed such stuff as nonsense.  Her mind was playing tricks on her.

She mentioned it to her husband who just looked at her with disdain.  ‘You’re losing the plot,’ was his response.

She mentioned it to her best friend who looked at her with a raised eyebrow.

She stopped mentioning the voice to others but the voice didn’t stop.  As the weeks went by the thoughts became stronger.  The voice became louder.   It stopped being a whisper, a sibilant hiss permeating her brainwaves, it became urgent, pleading, imploring.

Then one day the voice stopped.  Anna missed hearing those words.  She felt guilty that she had ignored them for all these months.  She got on with her life.

Anna felt the bed shift
She felt her mind drift

Buy me
Take me
Save me

The words shouted in her mind
She desperately tried to find
She groped and searched
As the bed lurched
She gathered her energies
A tickle, a trickle, a soft breeze
Whispers of her name
Calling, again and again

She felt their souls bonding
Their hearts blending
A joyous merging
Driving Anna forward
She quivered
With unexpected emotion
She felt her mind exhibit caution
Caught it on the wind
Intangible as it slipped
Lost like a postscript
Her life passed by in snapshots
Her family caught up in the plots
It happened in milliseconds
Images sparkling like diamonds
But yet others were as dull as dishwater
Some were as light as a feather
Passing by in a blur.

There was nobody she could talk to, everybody laughed at her silly thoughts but she knew, deep down she knew, she had to find this vase.  It was imperative otherwise why would she have these dreams?

On a visit to her Great-Aunt Margaret, who sometimes went off at tangents, their conversation became a little more interesting.  Anna’s ears pricked up.

‘Of course, mother thought we didn’t know she’d sold the vase but we all knew.  It was one of those unspoken family secrets.  Even dad knew – sort of.  We were just grateful she kept us fed and warm every day.’

Great-Aunt Margaret pointed to her bookcase.  ‘Take that photo album down dear, for me please.’

Anna complied with her wishes and passed the album over, surreptitiously wiping the dust off the cover with her sleeve.

‘Pfft, a bit of dust didn’t hurt anybody.’

Her Great-aunt was still sharp with eagle eyes.  Anna smiled.

Turning the pages, she stopped at a photo.

The family heirloom as was. 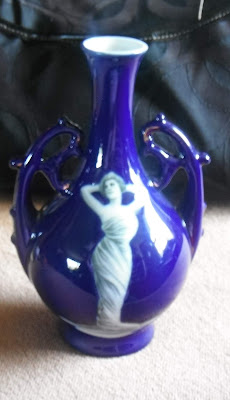 In the back of her mind Anna heard the plaintive cry again.

Two weeks later Anna was revisiting the quaint little market town near to where her family had lived all those years ago.  She let Ken go and sit in the café for a coffee, he would be quite happy ensconced with his Kindle, a cup of coffee and a slice of cake.

She knew she had to go in.

She purchased the vase.

She held it tightly to her chest, breathed a big sigh and felt/heard a responding sigh.

The whisper came, thank you for bringing me home.

The story of the antique vase will live on in the family.