This is the first of the November set of writing prompts, the chosen photo is by an amazing photographer, Trey Ratcliff. If you haven't seen his work, you can follow the link at the photo for his Google Plus profile, or you can find him on FaceBook as well. The picture chosen was taken at the Burning Man event and the album he's posted paints a picture of an amazing world full of stories, real and imagined.

Getting to the prompt, here is a quick review of the rules.

1) Use the photo and the 5 words provided in your story
2) Keep your word count 500 words or less.
3) You have until next Tuesday to link up your post.
4) Link up with your blog hostess (Nicole, Carrie, Tena or Leanne)
5) Have fun, don’t stress, let those creative juices flow.

The Photograph by Trey Ratcliff: 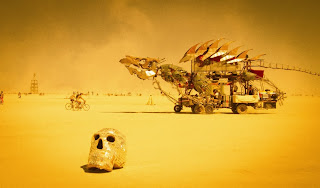 All votes had been cast.  The ballot boxes were sealed, locked and taken to the secure room to be counted and verified.  All the slips were collated, luckily the pile for reject slips was a tiny fraction as four other heaps grew and grew.

The candidates stood outside waiting.  They looked out to the horizon; they watched a tandem cycling across the sands, the yellow glow sending an ethereal image across the dunes.  These arid years were welcome after the great flood but now more rains would be welcomed. The scientists had worked hard controlling the weather.  Water inundation was a thing of the past arid conditions were now a money-making tourist trap.

Bounty hunters had abounded during the last few years of turmoil.  They would proudly display a trophy; maybe a skull they had found in the sand land locked areas.  These days work was hard to find, they were frustrated always looking for another angle to use their specialised and unique skills.

In the distance the mechanical transport made its way to the city centre, a dot growing bigger as it advanced towards the patient candidates.  Whoever won the ballot would have the privilege of sitting astride this wonderful vehicular invention as it made the celebratory rounds of the outlying districts and villages.

The talk between the four nominees was rather stilted.  The days and weeks had blurred into one another.  Their campaigns were long, they utilised every minute of every day to persuade people to vote for them.

Mr. Baker had asked people to put their trust in him.

Mr. Green said he would make sure the planet was safe.

Mrs. Smith captured people’s hearts.  The TV image of her bending down and accepting the proffered toy proffered to her by a young girl had whizzed around the airwaves making Mrs. S. everybody’s favourite, mum, aunt, sister, niece or cousin.  The men were stiff and formal compared to Suzy Smith but the question was would she be tough enough to deliver the goods at the end of the day?

Mr. Baker put his arm around his wife, smiled at her and said, ‘sorry honey.’

Mr. Green put his arm up pumping the air in victory although he was a tad too early in his celebrations.

Mr. Butcher fell down on to his knees, pressing his hands together in supplication as he prayed to a long forgotten god.

Suzy smiled turning her head and taking in the scene before her.  Her face was glowing with pride, the transformation complete, orange light from above showered her with an unearthly glow.  An aura surrounded her, the people gasped and then cheered; joy was evident on everybody’s faces.

Suzy Smith was now President of this tiny piece of independence.   A land she had a vision for, she had a dream and a million ideas for this land of orange sun and yellow, gritty sand.