It is time for this week's Blog Hop
Here is our picture prompt, the five mandatory words and the rules: 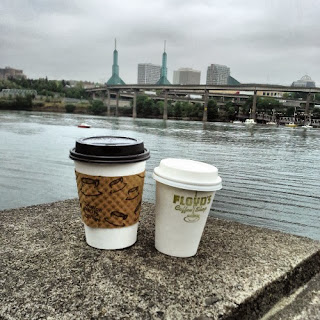 1) Use the photo and the 5 words provided in your story.
2) Keep your word count 500 words or less.
3) You have until next Tuesday to link up your post.
4) Link up with your blog hostess (Nicole, Carrie, </ a>Tena or Leanne)
5) Have fun, don’t stress, let those creative juices flow.

He placed their Styrofoam coffee cups side-by-side on the concrete, cold and hard as his face was she couldn't help a wry smile to herself as it seemed to reflect their relationship.  He was big and tall and strong and black and she was smaller, weaker but sweeter and paler.

He placed his arm around her shoulders and squeezed her affectionately.  He knew she was worried about the election that was taking place in a few days’ time.  He said that in the grand scheme of things, a place on the Board of Governors was neither here nor there.

He had discussed and debated the issues with her making sure she wasn't on an ego trip and although she vehemently denied it, she admitted she would feel proud and honoured to be on the Board. It really didn't matter to her if she wasn't on the committee this time.   She would still come home to a pile of washing, trying to get the smudges of jam off the t-shirt her son had worn last weekend when they decided to pack up a picnic to forget the hustle and bustle of busy lives if only for a short while.

She remembered that Saturday with great affection.  They had driven out of the city towards the greener, open spaces and followed the trail into the wood.  They entertained their son with stories of dragons and Knights of the Realm.

She watched her daughter being carried on her husband’s shoulders, her small three year old hands held on tightly to his neck, strangling him in the process.  They played hide and seek inbetween the trees, the trunks so huge that their girth kept them concealed, her son stifling his laughter with his gloved hands.

A breeze rippled her hair, making lines on the river as the skyline became overcast.  They were reminded of the time ticking away, moments passing, seconds slipping by, the hours hurrying along.

They took a deep breath simultaneously, as he started to speak a small puff of condensation escaped from his mouth.  She listened closely as he spoke the words she didn't want to hear.

He uttered noises, an incessant hum and drone, she tried to block out the meaning of his words but they kept repeating themselves.  It was time to move on.  He couldn't stay much longer.  In two weeks’ time he would no longer be her lodger. He couldn’t cope with the pressure of just being friends anymore and he wouldn't and couldn’t break up her family.

Outside she smiled and said she knew he was the nomadic type.

Outside she stopped the flow of tears.

Outside she nodded bravely and courageously stood up.

She dabbed her lips with a tissue, wiping away the residue of the now bitter tasting coffee.   Her legs were steady; she controlled her breathing as she looked into his eyes and saw the truth staring back at her.