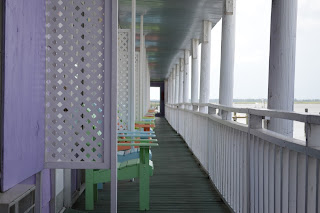 WRITING HOLIDAY
White butterflies fluttered in the gentle breeze, criss-crossing the glade in time with their more brightly coloured cousins.  In this utopian land there was no jealousy, envy was not allowed, every living organism was beholden to get along with each other.  There was no other way to live.  The trees harboured safe shelter for a myriad of animals from the tiniest woodlouse to the largest squirrel bounding from branch to branch, running up and down tree trunks in joyful exuberance.
The sun glinted through the trees, shadows danced and dappled on the enclosed ground dotted with daisies and buttercups, the occasional dandelion considered to be the only bad boy in this land of hope and .......
‘Daniel, come and get your lunch,’ called Tracy, ‘it’s on the table getting cold.’
Daniel looked at the clock on the wall.  Where did the time go?  He had been lost in his ‘other world’ all morning.
He slid on to the colourful bench seat, enjoying the sounds of the sea at their holiday cottage as his two year old daughter munched on some sticks of carrots and cucumber.   Lulu beamed back at him, picking up her teddy bear as she kept her parents enthralled by holding court and scolding her naughty bear for making a mess.
‘Her imagination is as bad, sorry darling, it’s as good as yours is,’ chuckled Emma.
Daniel’s wry smile didn't quite cover his discomfort as his wife’s misunderstanding of how much his writing meant to him seemed to come to the fore most days with her thinly veiled barbs.  He finished his sandwich, thanked Emma and disappeared back to his writing.  His wife’s loud sigh was audible as he turned his back.
After a few minutes of some breathing exercises to relax his mind and get back in the mood he picked up his pen and started scribbling again.
The late afternoon shadows developed into evening twilight as the glade began to come alive, animals scurried around doing their business, foraging for food, the mice and shrews kept out of the way of the rabbits who were so busy that they didn't look where they were going half the time.
As the moonlight took the place of daylight the glade took on a different atmosphere but tonight was going to be different.   This night was all about choosing a new leader to take them through the transition of the long summer evenings to the shorter autumnal and winter nights.
The barn owl started calling the proceedings to order.  As the voting began, anxiety could be felt in the trembling of the leaves, sibilant whispers sashayed through the wind.  The voting was over, the time was nigh, the announcement was made.
Reindeer.  Congratulations were whispered then became louder as a strong new leader would protect this small enclave .........
The shrillness of Lulu’s laughter shattered Daniel’s thought processes as she splashed and played in the bath.  Ah, family life, thought Daniel wryly.  He wouldn't change a thing.
Word count: 502 with title