The Power of Books

This is the first time I've joined in this bloghop.

The rules are simple:  there is a photo prompt five randomely generated words

3) You have until next Tuesday to link up your post.
4) Link up with your blog hostess (Nicole, Carrie, Tena or Leanne) when you’re done via the inLinkz linky below. 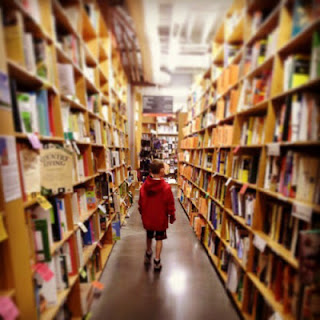 The Power of Books
He had to stay with his Nan while his mum was at work.  They had to go in to town to the library to get a book his Nan wanted. He wandered down the aisles between the two huge book shelves towering above him.  His Nan always told him how reading was exciting and how you could get lost in a book.  He always told her reading was boring.
His dad said he was dyslexic like he was.  He wanted to be like his dad.  His mum said his dad didn't study at school and was naughty and that’s why he didn't have a job now.  His dad was always busy though.  His dad had a car.  His dad had an X-box.  His dad had a big television.
His mum worked four days a week and was always tired.  His mum said they didn't have enough money.  So his dad didn't work and he had enough money and was going to a concert in London next week.  He didn't understand adults.
His Nan had left him to wander through the library while she went and chose her books.  She needed to find something on how to get rid of the mole hills on her lawn.  Granddad had asked her to find out.  He didn't know why she didn't just Google poison for moles.  That would sort them out.
He tilted his head back and felt the strain on his neck as he looked up at the shelves.  Who wrote all these books?  Where did all these words come from?  Why did people read books?

There was a book just poking out, tantalising him.  He could just see the cover.  It had a picture of some dragons on it.  Perhaps it was to do with a computer game.  He reached out with his hand and took it down from the shelf.
His fingers trailed over the picture as he held it in his left hand, his right hand hovered over the fly leaf as he opened the cover and started to read.   He sat down cross legged on the floor and pulled the hood of his red jacket over his head.
He reached in to his pocket and pulled out the napkin he’d saved from lunch and wiped his hands so they were clean as he turned the first page.
He leaned back against the sturdy bookshelves as he became lost in another world of magic, myth and flying monsters.
‘There you are,’ whispered his Nan.  ‘Are you ready to go?’
He looked up with glazed eyes as he slowly came back to reality.
‘Can I keep this book, Nan, please,’ he asked.
‘We’ll get you a membership card for the library,’ she said smiling, ‘and then you can borrow and read as many books as you like.’
Word count: 471
Posted by Sally at 09:36