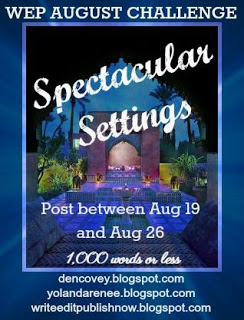 This first challenge has two parts. You may do both parts or just one. Your choice.

For this challenge you will be asked:
1.    to share with us a paragraph from a novel, or an extract from a poem, or a photograph that stopped your heart with a spectacular setting etc.
2.    then you will describe to us how your chosen 'setting' spoke to you. Why did you like it?
3.    then you have the option to:
1.    write your own 'setting' piece in any genre, or
2.    write your own poem which highlights 'setting' in some way, or
3.    share a photograph that blows you away every time you look at it and tell us why.
4.    share an artwork that shows a 'setting' you love and tell us why you love it.
5.    write a small playscript which is all about 'setting'.
Remember, setting is both place and time.

Many thanks go to our hosts Denise Covey and Yolanda Renee for re-establishing WEP, a bi-monthly writing challenge, they work very hard to ensure everything runs as smoothly as possible. 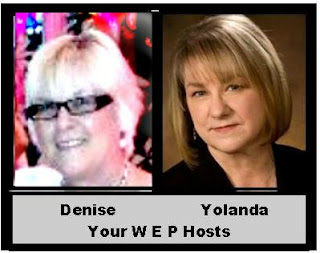 UP THE MOUNTAIN TO ALM-UNCLE

From the old and pleasantly situated village of Mayenfeld, a footpath winds through green and shady meadows to the foot of the mountains, which on this side look down from their stern and lofty heights upon the valley below.  The land grows gradually wilder as the path ascends, and the climber has not gone far before he begins to inhale the fragrance of the short grass and sturdy mountain plants, for the way is steep and leads directly up to the summits above.

I read Heidi as a young girl, probably nine or ten years old.  The description of a path leading up to a mountain took my imagination as something I had never experienced and probably never would.

The language is quite simple but has enough, almost exotic, vocabulary about it to appeal to a young girl’s imagination, ‘stern and lofty heights’ – ‘inhale the fragrance of the short grass.’

It was only in books that I could realise the potential of such words and try and use them in my everyday language, not that that went down well with my peers who thought I was a bit of a snob.

As the story proceeds it becomes clear that this idyllic route to the top is going to change a little girl’s life in ways unimaginable.

On a clear sunny morning in June two figures might be seen climbing the narrow mountain path, one, a tall strong-looking girl, the other a child whom she was leading by the hand, and whose little cheeks were so aglow with heat that the crimson colour could be seen even through the dark, sunburnt skin.  And this was hardly to be wondered at, for in spite of the hot June sun the child was clothed as if to keep off the bitterest frost.  She did not look more than five years old, if as much, but what her natural figure was like would have been hard to say, for she had apparently two, if not three dresses, one above the other, and over these a thick red woollen shawl wound round about her, so that the little body presented a shapeless appearance, as, with its small feet shod in thick, nailed mountain-shoes, it slowly and laboriously plodded its way up in the heat.  The two must have left the valley a good hour’s walk behind them, when they came to the hamlet known as Dorfli which is situated half-way up the mountain.  Here the wayfarers met with greetings from all sides, some calling to them from windows, some from open doors, others from outside, for the elder girl was now in her old home,.  She did not, however, pause in her walk to respond to her friends’ welcoming cries and questions, but passed on without stopping for a moment until she reached the last of the scattered houses of the hamlet.  Here a voice called to her from the door.  “Wait a moment, Dete; if you are going up higher, I will come with you.”

The power of words can conjure up fantastic images, spectacular settings and along with an image, as on the cover of this particular book, a story to unfold.

I only wish I still had my childhood copy of the book.  I do have a copy downloaded on to my Kindle for posterity’s sake.

This picture plucks at my heart strings.  It is a picture of a very dear little boy plus the added spectacle of the sea meeting the sky.  To me, it is very evocative.   The freedom and joy expressed in the little boy’s stance is priceless. 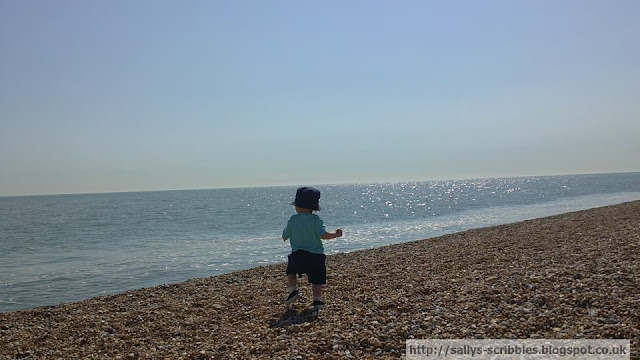 Different hues of blue spread across the horizon, the sun glinted and sparkled on the water, shining like diamonds on crests of gentle rippling waves.  The horizon stretched out as far as the eye could see, the sky a cloudless azure, a perfect summer’s day.

It wasn’t very often a day like this happened in the UK.  Molly had decided to make the most of this rare opportunity, packed up her large, cavernous stripy bag, stuffing in suntan lotion, bottles of water, wet wipes, nappies, a change of clothing, snacks and treats, her mobile phone (most important) a couple of towels and various other must-haves for a day at the beach.

After settling down in a sunny spot, she slathered his arms and legs and nose with Factor 50, as he protested and squirmed with lots of laughter and tickles along the way but she must protect her blonde, blue eyed baby boy from the ravages of the depleted ozone layer. She jammed his sun hat on his head, turned him towards the shingle and let him go.

She let Timmy run loose where she could keep her eye on him because if you gave her 18 month old toddler an inch then he would gaily and cheerfully take the mile.

His little legs toddled off, his arms came up, his hands fisted in joy as he kicked out with his legs finding running a bit more difficult over the pebbles than running around on a floor or the paved courtyard at home.

Molly could hear his squeals of delight as he spied the water.  Luckily there was a drop down to the beach before the tide met the sand so if he took it into his head to go charging towards the salty water she would be able to catch him and bring him back to safety. 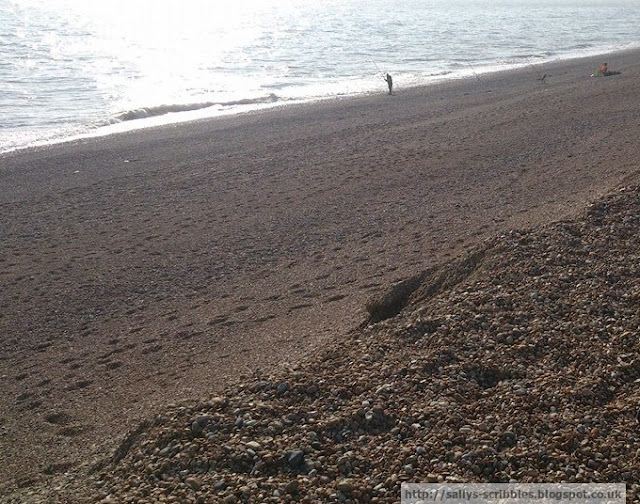 Crossing her legs into a quasi lotus position Molly reached into her bag for her tobacco.  Keeping a beady eye on her youngster she rolled a cigarette and thought she would add a little magic to it this morning.  They planned to stay on the beach for several hours so she would be safe to drive back home later.

Taking a well earned puff, she exhaled slowly as her thoughts turned to more than a year ago when her labour pains began nearly two months early.  Living in a hamlet in a headland on the south east coast of England, sheltered in an area of low-lying land, meant that a journey to the nearest hospital would take 40 minutes.  Luckily her good neighbour bundled her and her partner, along with her own young son, into her car and drove as quickly and as safely as possible to the hospital.

Frantic calls to the imminent grandparents ensued but young Timmy decided he wouldn’t wait for anybody.  After a couple of days in an incubator and a couple of weeks in the special care unit Molly was able to bring her small baby home.

She waved to him as he called to her, pointing to something he saw out on the sea, his bright inquisitive eyes spotting something only visible to him.  Perhaps it was a glint from the sun making a shape of a whale or something similar.

Mellowing out and relaxing her mind further Molly now considered her future.  She had a major decision to make and although most of her mind was made up she tried to consider all aspects.  It really wasn’t going to be an easy decision.

Pros and cons, what-ifs, maybes, should she and, most importantly, could she make a life if she took this course of action.  Molly knew she would upset a lot of people by taking this decision but her main concern would be to ensure Timmy had a loving home life, his relations around him and that she had a good support network.
She unfurled her limbs, stood up and stretched in to a yoga pose she used to do, elongating her back and folding her waist over to reach down to her feet.  As she rose again she saw Timmy’s quizzical face in her eye line.
Jabbering away in what she termed ‘Timmy-speak’ he pulled at her shorts making her come with him and pointing to the sea.  Molly picked him up in her arms and pulled his trainers and socks off, slipped her own sandals off on to the rug, adjusting Timmy’s weight in her arms a bit more securely, they made their way over the shingle to the edge of the water.
Timmy squealed as she dangled his feet in the salty water.  She placed him down on his two feet, gripping his hand tightly, much to his protests, as a gentle ripple washed over her larger feet and his tiny, white feet.
A piece of brown seaweed became entangled inbetween Molly’s toes, cold and squidgy and lumpy; she let go briefly of Timmy’s hand to disengage the smelly algae from between her toes.

Down he went on hands and knees, full face into the briny liquid.  Molly scooped him up as he spluttered all over her; she brushed the water from his eyes and pushed his hair back on his forehead.

‘Again, mummy, again,’ came the delighted shouts.
Nothing fazed this boy of hers.  He had no cares in his little world, he cried, he was picked up, he was hungry, he was fed along with all the other caring aspects of tending to a toddler. If only her own life was that simple.

Back on the rug, cuddled into her, her sleepy boy nodded off.  Molly took the opportunity to gaze out to the sea, the horizon a line divided by two colours of blue, meeting far out.  She knew there was more out there, she knew there was another life waiting for her.

Did she have the courage?  Should she wait and see if things got better?  Did she want them to get better?  She must find an answer soon.