WEDNESDAY WRITERS this week is a photo prompt with five mandatory words to use in your story.

Hosted by the lovely Deb Stanton at Inner Sunshine you can find out more by going to this link: 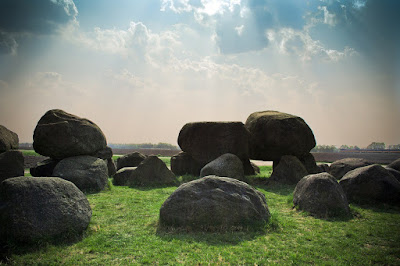 Mandatory words to use:

Sarah reached the stones and leaned against them.  Her panting matched her dog’s although her tongue didn’t loll out of her mouth as his did.  She unzipped the backpack and retrieved the water and bowl for Loki to have a much needed drink and drank from another water bottle herself.

She perched on one of the standing stones, re-arranged the pink mulberry scarf around her neck as the cool wind sent a draught through her hair and grazed her throat.

It had taken them slightly longer than usual to reach the summit of the hill, stopping to talk to people who admired her Husky/Akita/Snow Wolf also gave her a sense of pride.  Even the coach driver parked in the car park waiting for his group to return had engaged her in conversation about Loki.

She raised her head to the sun as its rays bounced down to the stones through the clouds.  A sense of peace enveloped her and she felt her spirits lift as the warmth began to alleviate the slight chill of the wind coming across the hill.

Sarah absent-mindedly stroked Loki as he was always looking for attention.  He was part of their family now along with her fiancé and her two boys and her soon to be young five-year old stepson.

How her life had changed over the past few years. It had been tough for a while there, bringing up two young boys on her own but even though she said it herself, they were great lads and she was very proud of them both.

Her mobile dinged surprising her that she could get a signal up here.  The text message was from Dave, her fiancé.

Hey babe, I’m on my way home.  I got some frozen chips for tea tonight. Love you.

She adored this man she met at a gig quite by chance.  He was her world.  She texted back telling him she was by the stones and would walk back shortly.

Her phone dinged again with a picture.  She laughed out loud.  Dave had been to the barber in town to get his hair cut and this was the result.   He liked to be well groomed, a bit different from the family photos she’d seen when his ginger hair was flowing long and parted in the middle.  Her influence was good for his style she thought to herself.

Gigs didn’t happen very often now as her health was a bit iffy, never knowing whether she would feel well enough to go anywhere.  Luckily today was a good day which is why she and Loki were up on the hillside.

Popping a mint in her mouth the young woman and her dog started the trek back down the hillside.

The dog thought of squirrels and rabbits and Sarah’s thoughts ran to what was in the fridge to go with the frozen chips.  Green and red peppers, courgette, lightly sautéed with some mushrooms and a couple of eggs would go nicely with those chips.