Go to her blog for submission guidelines.

This week we have two photos as our prompt for a story in the realms of fantasy – maximum of 500 words.

This is not my usual genre so I struggled a little bit with this. 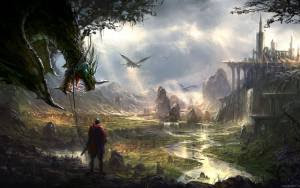 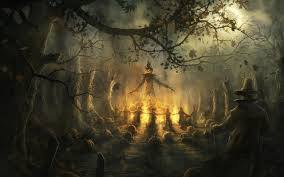 Argon looked into the distance and beheld his city, ravaged by war.  He had been absent for ten long years.  Now he was returning, knowing in his mind that things would never be the same again, hoping against hope that his love would be waiting for him, after a decade’s absence he wasn’t optimistic.

He wouldn’t blame Lyla if she hadn’t waited for him.  He’d thought of asking her to marry him but realised how selfish it would be to bind her to someone who may never return from war.

He felt the tender, cooling touch of B’lor, her tendrils stroked his thoughts as he conjoined with his dragon.

It’s not what I’d described to you, my dear.
It is your home, dear Argon.

B’lor looked fierce but beneath that fearsome exterior was a heart of gold, a true leader.  She led her retinue of young dragons with a firm but guiding wing.  Argon watched her brood whirl above him in the skies of his beloved homeland.

He sent thanks to the Goddess of Gold who had predicted this moment several years ago.  He had learnt so much during his travels.  There was so much more to learn. First though he had to persuade his people about dragons and their ways and then introduce them to the ways of the Goddess of Gold. This was his mission so that his race could enter into a spiritual realm. His people could advance and, hopefully, begin to live in peace.

The annual ceremony celebrating the Goddess of Gold had frightened him at first.  He was not a coward and would fight anybody to the death if necessary but this was beyond his comprehension.  The day had started with ritual cleansing.  As an observer – they refused to say he was a captive – he watched spell after spell incanted through the daylight hours.  A procession then made its way to a secret glade deep in the forest.  High priests and priestesses sat in silent meditation for a few hours.

He was certain there were hallucinogenic drugs in the drinks and food, not overpowering but enough to make everything seem rather surreal.  His mind and body relaxed into an easy posture as the chanting began.

An amazing sight beheld him as the Goddess of Gold appeared to all before her.  She singled him out, speaking directly into his mind.  He saw images flash before him, he felt emotions slam into him, he felt heartache, betrayal and treason from those he thought were with him.

Then he was uplifted and his emotions became joyful, loving and trusting.  B’lor came before him, as their eyes met, his green and steady, hers whirling with a myriad of colours, they bonded in a way he had never known before.

It took the unlikely pair, leading a group of dragons with a raggle-taggle band of loyal soldiers, several months to make their way back to their home, and hopefully a new home for the dragons and himself.