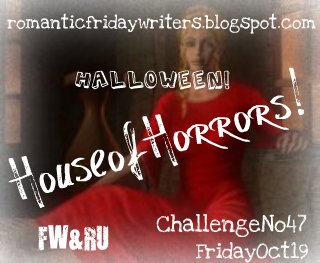 In the run-up to Halloween at the end of this month we have been requested to submit chilling stories of ghosts and haunted locations and maybe even love from beyond the grave.  A romantic element is essential but stories with a thrilling edge of fear and dread to add to the romantic tension building between our Hero/Heroine.
Word count is 800 - 1000 of prose/prosetry

Here is my submission: 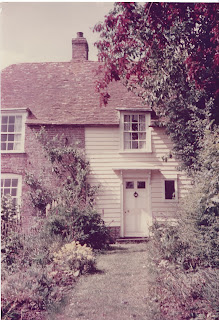 So this is it.  Today is the day, the final step.  Ellen follows her husband George as they walk up the flagstone path and approach the white wooden door.  She watches him put the key in the lock and turn it slowly.  Ellen takes a deep breath as the door opens and she steps over the threshold.  She stops a moment, closes her eyes and whispers reverentially, ‘hello house.’
‘Did you say something?’ asked George.
‘I was just introducing myself to the house,’ she replied.
George shook his head at her quirkiness.
The removal men call out wanting to know if they can start bringing in the furniture.  She directs the foreman to bring in the box containing the kitchen items first.   As she fills the kettle from the old fashioned taps over the butler sink she wonders, not for the first time, if this is actually the right decision.
When they told their family and friends that they were selling up and moving everybody was flabbergasted.  You’ve lived in that house since 1982 they gasped in shock.  Why don't you wait, don't make any hasty decisions.
George patiently explained to them that retirement was imminent and they wanted to get settled before that happened.  What he neglected to tell them was that Ellen had seen the property details in the window of an Estate Agent in town and rushed home to tell him that she wanted to move.  Not for the first time his wife was able to surprise him especially when said she felt the house was ‘calling’ to her.  He didn't bother to argue.
‘Nice cuppa, missus,’ said the foreman of the removal company.  Grunts of appreciation came from the other men who had their mouths full of chocolate biscuits.  As Ellen moved to take the tray from them she overheard a couple of the young lads talking.
‘They won't last long,’ said the tall lanky one, who sported many piercings.  ‘Yeah, nobody does,’ replied his mate, ‘ghostly goings-on.’  They were laughing as they manoeuvred the large dresser down from the lorry.
Interesting, thought Ellen but then dismissed the conversation as she became very busy putting the house to rights.
A couple of weeks later everything was in its place.   Ellen opened the oven door to check on the beef casserole that was slowly cooking the oven.
‘What’s up,’ said George as he expertly uncorked the bottle of red wine.
‘Somebody touched me on the shoulder,’ came the reply.  ‘Can you feel that draught?’
‘You know I never feel anything like that,’ said George despondently as he passed the glass of wine to Ellen.
Lying in bed later that night Ellen tried to recreate the feeling she had earlier when she was in the kitchen.  Perhaps I’m too tired to do anything now she thought drowsily as she drifted off in to sleep.
He was cold, so, so cold and it was dark, so very dark, pitch black he couldn’t see.  He could hear somebody screaming.
Ellen woke up with a start.  Luckily it was just a dream, well a bit more than a dream bordering on a nightmare.  She had a feeling of loss and despair following her around for the rest of the day that she couldn’t shake off.
George came home and noticed her mood straightaway.  Ellen explained her dream and how she had felt all day.
‘I think somebody wants me to know something,’ she said.  ‘I feel as if I should know this chap,’ she said thoughtfully.  ‘There must be something here that would explain it,’ said Ellen as she looked around the sitting room.  Everything seemed totally normal, nothing out of place.
She snuggled into his shoulder, smelling his aftershave, as she nodded her head.  ‘Can we sort the attic out at the weekend?’
‘You’re a slave driver; you know that, don't you?  I work all week and then you want me to hump more boxes around in the attic at the weekend,’ grumbled George.
She squeezed him hard and whispered, ‘thank you.’
Ellen slept very well that night and the following night but Friday night was a different story.
Now along with being very, very cold, so icily cold somewhere very, very dark, he was also wet.  There was water all around him.  He could hear people screaming.  He opened his mouth and started swallowing freezing cold water, so salty to taste.  He was drowning.  He was falling, tumbling, deeper and deeper into the cold wet depths of the ocean.  The noise was horrendous, crashing noises, deep booming sounds echoing through the volume of water.
She was being shaken.  She opened her eyes and looked at George staring at her.  ‘Are you alright?’  She nodded dumbly and stuttered, ‘night-night-nightmare.’
The next morning after a leisurely weekend breakfast George and Ellen started to redistribute the boxes in the attic.  Ellen crawled into the eaves of the roof.  There was a leather chest pushed deep in the recess.   George pulled it out, brushing off the dust and cobwebs.
As soon as Ellen lifted the lid and saw some small tissue wrapped items, she knew they held the answer.
They brought the leather chest down into the living room, opened the lid and took out, amongst other things, a plaque, a tin brooch, and a couple of pictures. As she looked at the items turning them over in her hands, she could feel the love passing down the 95 years they had been in storage.

With tears in her eyes, Ellen realised that Walter was a sailor who lost his life in World War I.  She listened to the voice in her head as Walter Kelly told her that he regretted not telling Tilly Hunt that he loved her.

Ellen hung the plaque of Walter on the living room wall in the cottage and said ‘hello’ to him every time she passed, sometimes she blew him a kiss and sometimes she touched the plaque.
She didn’t have any more nightmares.