WEP - THE END IS THE BEGINNING 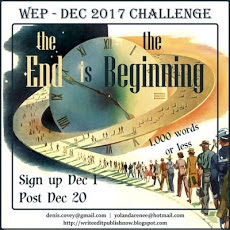 
THE END IS THE BEGINNING

It was over.  The war was over.  Daphne glanced down through the grimy window on to the celebrations taking place below.  Dancing in the streets.  Smiles on faces.  You could taste the euphoria.  Daphne realised it wouldn't last.  They thought all their problems would now go away.  She knew differently.  She turned back to her patients, tending to their needs.  These poor soldiers, sailors, airmen their lives would always be different.  They would have to make new lives for themselves, new beginnings, a fresh start but all free to live without oppression.

George tried to take in his surroundings.  What he could see through the slit in the bandages covering most of his face was very limited.  He remembered bits and pieces, the screams, the pain, the agony all around him.  He felt his mind slip away into a dark recess, it was the only way he could cope.  Now it seems he was away from the fighting.  Away from the noise, the smells, the bitterness and grief that wafted through the air and permeated into every pore of his skin.  Now he was warm, not able to move very much, still hungry, still thirsty and still afraid.

The next thing George knew was the voice of an angel asking him if he would like a cup of tea.  He tried to laugh.  He’d rather have a pint of best bitter, he didn’t care what the time was.  His upbringing and manners took over as he replied in a croaky voice that yes, he would very much like a cup of tea.

Strong, capable arms positioned themselves under his arms, as they lifted him to a seating position in the bed.  A waft of perfume consumed his senses.  His nostrils would remember that smell forever.  It took away the stench of the battlefield, the stink of the latrines, the iron smelling blood that seeped into his clothing.

Daphne held a spouted cup to George’s mouth as he drew in a mouthful of tea.  His eyes focused on her hands as he managed to drink half the cup of liquid.  It had obviously been stewed over several hours but it was wet and, bliss of bliss, sweet on his taste buds.

Daphne sat by his bedside and introduced herself to him.  ‘I know your name is George,’ she said, smiling at him.  ‘You are probably wondering why you are here.  I'm afraid you suffered severe burns to most of your body but you are recovering very well.  It was touch and go to begin with. You are strong, a fighter and a very brave man, along with all your colleagues here and elsewhere.’

George nodded.  He had many questions but for now just drinking that cup of tea had worn him out.  His eyes started to close against his will, he wanted to keep listening to Daphne.   He could listen to that voice all day long and what he could see of her was lovely if rather blurry.  He wondered if his eyesight had been affected.  He wondered about the rest of his unit.

Daphne patted his arm as she rose to leave him.  ‘Your commanding officer is coming by tomorrow.  He’ll tell you everything you want to know.  Just rest now and I’ll be along a little later to get you settled.’

Daphne returned to work after a few days leave.  Her heart started thumping as she realised a different man was incumbent in the bed George should be in.   Sister came up to her and went through the notes.  Keeping her expression professional Daphne waited, her shoulders relaxed as Sister’s monotone described George’s move to a convalescent home nearer to his parents.

The London hospital closed its doors six months later and Daphne transferred to the Cottage Hospital in Suffolk.  She had to keep nursing, it was her vocation.  Many people needed her care.  As she nursed her patients she often thought of George.   She didn’t even know where he lived.  There was something about that man that wouldn't leave her.  Many times she tried to shrug off the feeling that she should make an effort to try and find him.  There was little or no hope of her being able to do that.  The War Office wouldn't pass any information to her as she wasn’t a relative.

A couple of men had asked her out to the pictures or the village dance but she always declined.  It wouldn't be fair on them as she was still holding a candle for George albeit she’d only known him for maybe a week.  That week was all it had taken.  There was no way she could have let him know how she felt, she was his nurse and he was a patient.  It would have been unethical to show even the slightest hint that she had feelings for him.

George walked down the High Street.  He kept his head down with his hat pulled low over his forehead.  It shouldn't matter that his face was scarred, everybody had been so kind to him since he’d been discharged from the hospital and returned to his family home.  Now all he had to do was find a job.  They were scarce but he would take anything in an office.  Physically he couldn't do manual work because of his gammy leg and many other men needed those jobs more than he did.  Financially he was solvent with the inheritance from his grandparents to keep him afloat but he needed a mental stimulus or he would die of boredom.

Then he heard it.  Then he smelt it.  He knew that voice of an angel.  He knew that perfume.  He looked around and there she was.  His angel, helping an old lady cross the road.  He wanted to call out.  He whispered her name, Daphne.

Daphne heard a whisper on the wind.  She turned her head as she reached the pavement.  It was George.  She smiled at him as her heart sang out in joy.