J.L. Campbell is hosting a blogfest entitled, Who's Your Hero?

It's easy to participate. Write a maximum of 300 words in which you talk about someone who's encouraged or inspired you in some way. It may be a spouse, writing buddy, teacher, one of your kids or none of the above. You get the gist. 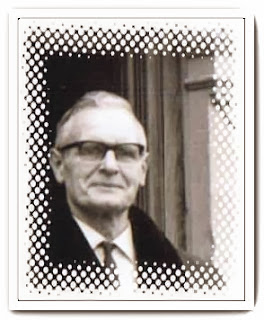 My Grandfather, My Hero

Fred came from a large family, seven brothers and one sister.  In 1920 he served as a soldier in the Army in India.  In 1929 he married my grandmother, Hetty.   They had two beautiful daughters who went on to have families of their own.

Fred wasn't a great talker but he always had time for his grandchildren.  Granddad could fix any toy, he re-glazed windows broken from wayward cricket balls hit by my brother and cousins.  He showed me how to pluck a turkey ready for Christmas, how to play cards and games and not be a sore loser.

I remember the smell of paint, of putty and linseed oil, the special aroma of Brylcreem he used on his silver grey hair.   He had pale powder blue eyes encircled by a white ring outside which was a Davis family trait that has died out in future generations.  His hands were huge to a young girl, dotted with prominent blue veins that fascinated me.

We sat on the river bank; I read my book while my grandfather taught his grandsons, Bob, Richard and Nick to fish with patience and silence so that they didn't frighten the fish away.   I vividly remember the smell of the fish in the sink in the outhouse until my grandmother had time to gut them and de-scale them ready to cook them for tea.

My grandfather would call me ‘Princess’ which made me feel so special.

He never talked about his time as a serving fireman during the Second World War while his family were evacuated to Somerset to safety from Hastings in the South East of England, a town pummelled by the Luftwaffe bombs and doodlebugs.

Love and miss you Granddad.