Here is a quick rundown on how the blog hop works:
1) Use the photo and the 5 words provided in your story.
2) Keep your word count 500 words or less.
3) You have until next Tuesday to link up your post.
4) Link up with your blog hostess (Nicole, Carrie, Tena or Leanne)
5) Have fun, don’t stress, let those creative juices flow.
Here's your inspirational photo! 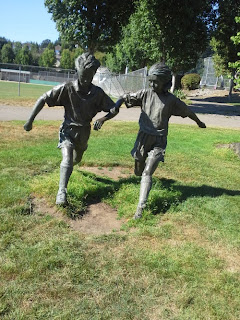 Here is my short story using the photo above and the mandatory five words.

School Holidays
Gloria stood at the kitchen worktop her hand pressed to her back lightly massaging her spine trying to relieve the arthritis ache that accompanied her elder years.    The gardening she did yesterday afternoon was taking its toll this morning.  Row upon row of plants she’d managed to bury deep in the fertile soil of her lovely cottage garden.  She was pleased to see the results of last year’s crop of bulb planting gradually growing albeit about three weeks behind the norm due to the adverse weather conditions.
Now the weather was being just as strange with thunder storms and heat waves but today was going to be glorious.   She pulled the fresh bread from the bread bin and started slicing the Tiger loaf.   The two lunch boxes were for her grandsons, she was making them a banana and jam sandwich followed by one of their favourite treats, a Wagon Wheel, a chocolate biscuit with a marshmallow centre, not usually allowed in their own home which always consisted of very healthy, organic food.
She added a packet of crisps, fruit juice and an apple and hopefully that would keep Tyler and Bradley happy for the whole day.  She’d be surprised if they waited until lunch time before they started to eat their way through the contents.
She always looked forward to the summer holidays when she loved helping out her daughter out who always found childcare difficult as she and her husband had full time demanding jobs.  Kathryn was an accountant and always had deadlines to meet and Rob was often away on naval manoeuvres for weeks at a time.  That was the only downfall to being married to a serving sailor but it gave her an opportunity to spend quality time with the two boys.
She could hear them bickering gently upstairs; there was only a year between them but everybody thought they were twins.
The boys bounded down the stairs greeting her gaily.  ‘Nan, it’s a lovely day.  What shall we do today?’  Tyler was always the ring leader, the spokesman of the two although he was the younger boy.
Bradley eyed up the food on the counter ready to go in the lunch boxes.  ‘Are we going out, Nan?’ he asked quietly.
‘I thought we could go to the coast today,’ Gloria replied.  ‘I’ve got tickets to visit the Blue Reef Aquarium.’
‘Shark attack, shark attack.’  The two boys made large gnashing motions with their hands as they dove under the kitchen table and pretended to be large predatory sharks attacking each other.
Gloria started laughing which made the boys laugh, they were laughing so much they started coughing and hiccupping and Gloria reached for a tissue to wipe her streaming eyes.
The doorbell rang.  Gloria stopped in her tracks, 8.30 a.m. nobody ever rang her doorbell this early in the morning.  Through the glass pane she could see the outlined shadows of two uniformed policemen.  This would not be good news.